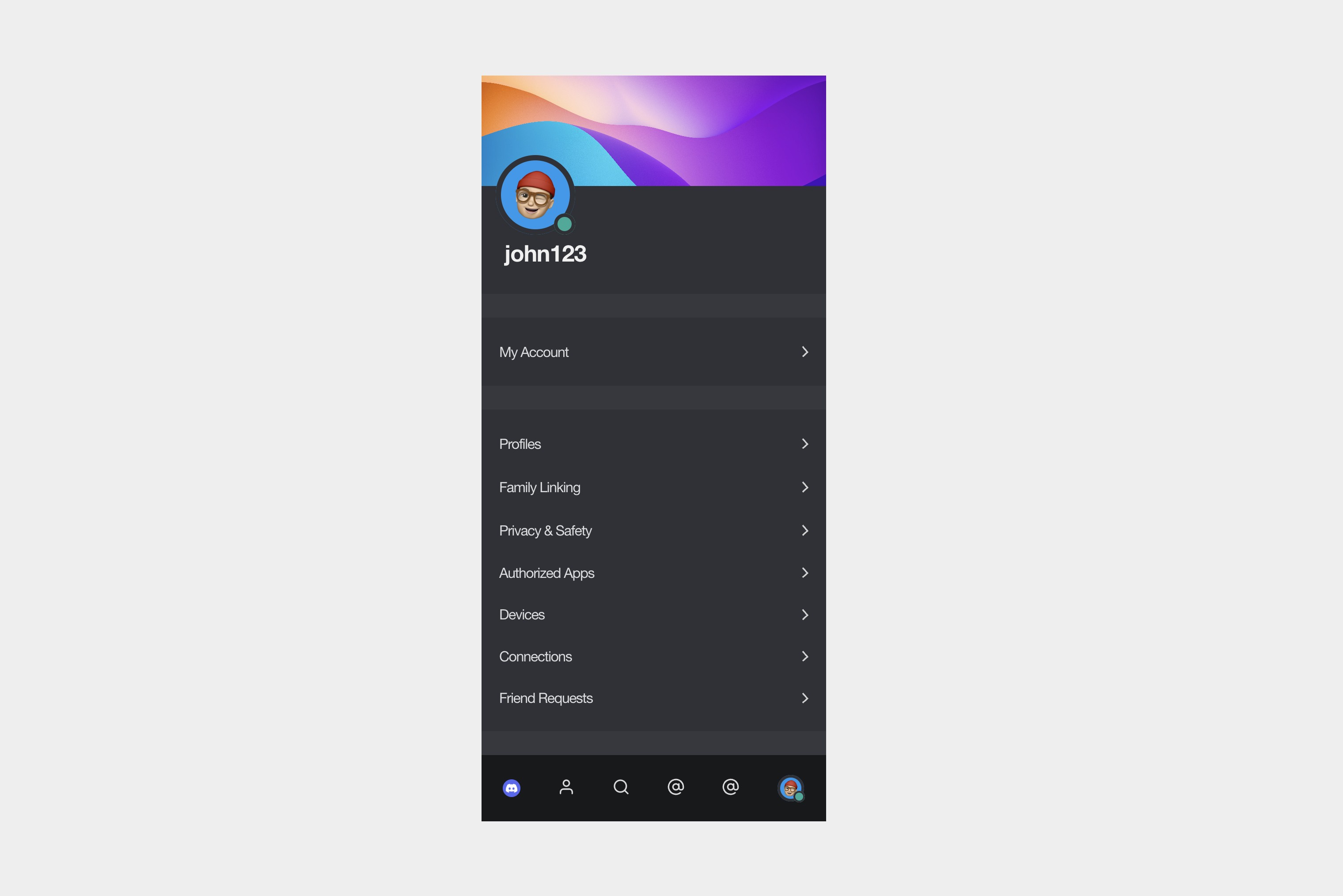 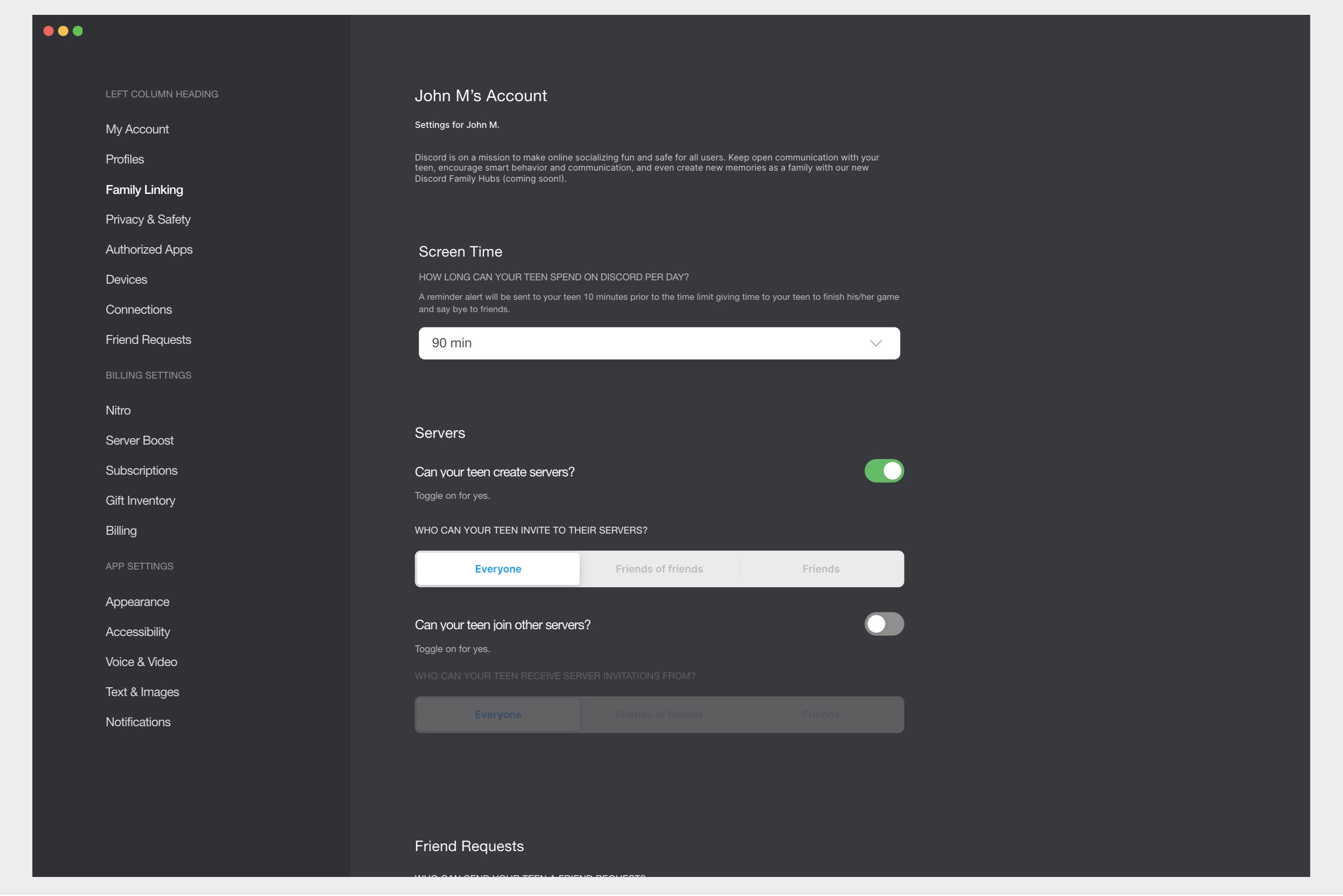 Can there be a middle ground?

In this project, I explore potential solutions to the problem of Discord’s lack of safety precautions for its youngest users.

Studies show that internet use is on the rise amongst kids and that more and more, the way they hang out with friends is through online social platforms like Discord.

Two-thirds of parents surveyed won’t let their kids use Discord because they worry about internet safety and their kids mental wellbeing. But Discord has been very hands-off about implementing any way for parents to monitor their kids’ activity on the app.

Parents are finding that it’s harder than ever to let kids be kids in today’s digital age.

I couldn't help but think there could be a solution.

How might we create a Discord experience which feels fun for kids and safe for their parents?

In this case study, I cover some ideas I designed in order to address this problem. I deep-dive into what worked and what turned out not to be so feasible.

Ultimately, through iterating, testing, collaborating, and listening, I come to a solution that feels both simple for parents & fun for kids. Best of all, I explore how it could even turn Discord into a leader in the social platform space when it comes to online safety and promoting positive use amongst teens.

I knew that in order to most effectively design a solution, I would need to go straight to the source: the parents whose kids desperately want to use Discord.

80% of parents want some sort of parental controls before they would even consider Discord use for their teen.

“It seems to me that much of the safety protocols currently in place for Discord are left either up to the child to report bad behavior, or the burden is place on the parent to proactively go into the child’s account. This is a pain!”

Turning to similar platforms like Roblox, Facebook Messenger Kids, I was able to identify safety features those apps have that Discord does not.

I also looked at third-party platforms like Bark to see what they were doing for online protection. 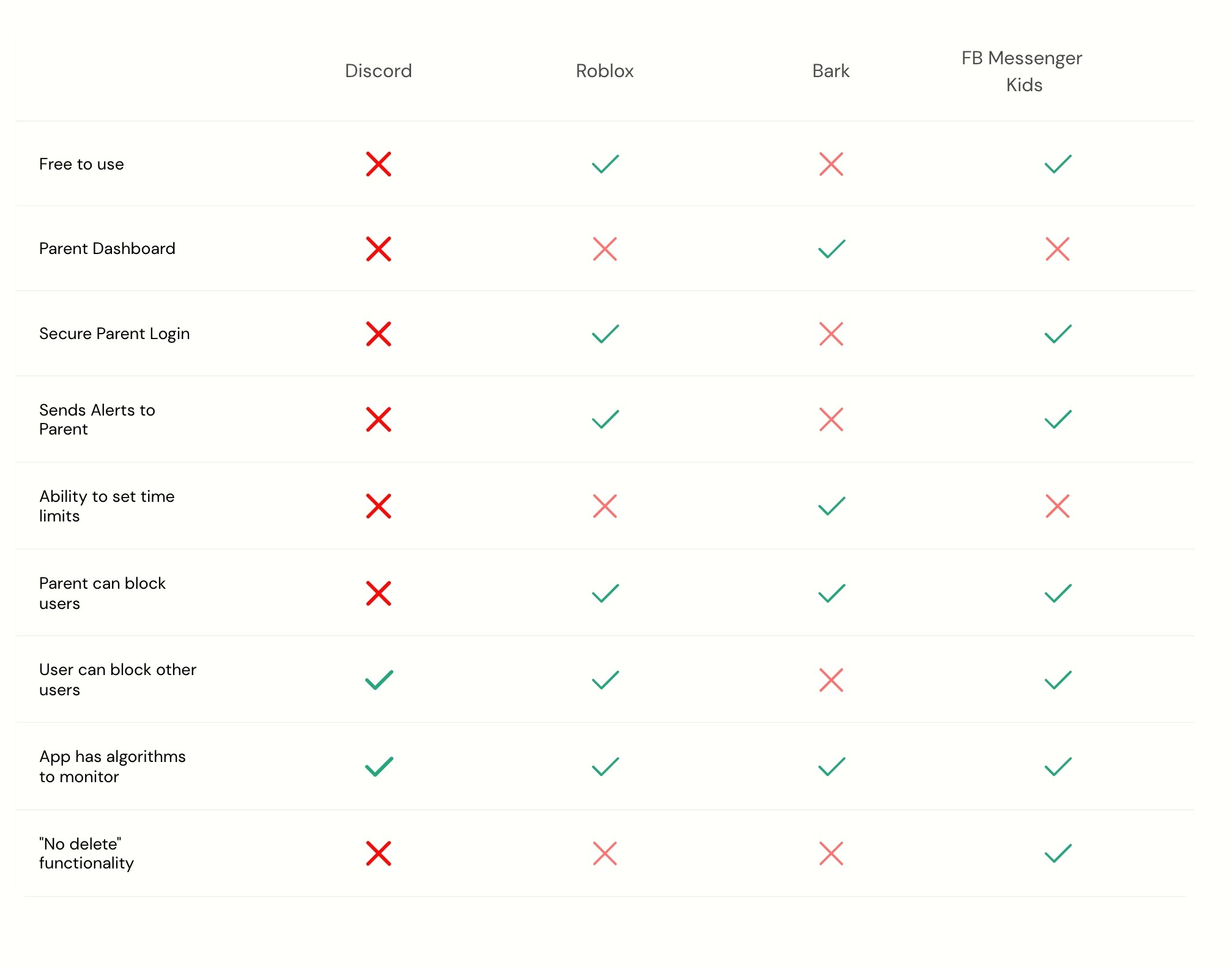 Upon studying the competition, I dove into two ideas that I thought I would use in tandem.

It became clear that perhaps I was overcomplicating this process. I examined how I might streamline the process for the user and save myself time as the designer. I decided that the idea of a separate app was cumbersome, and if a parent had to download a separate app in addition to signing up for a Discord account, they might abandon the whole process. 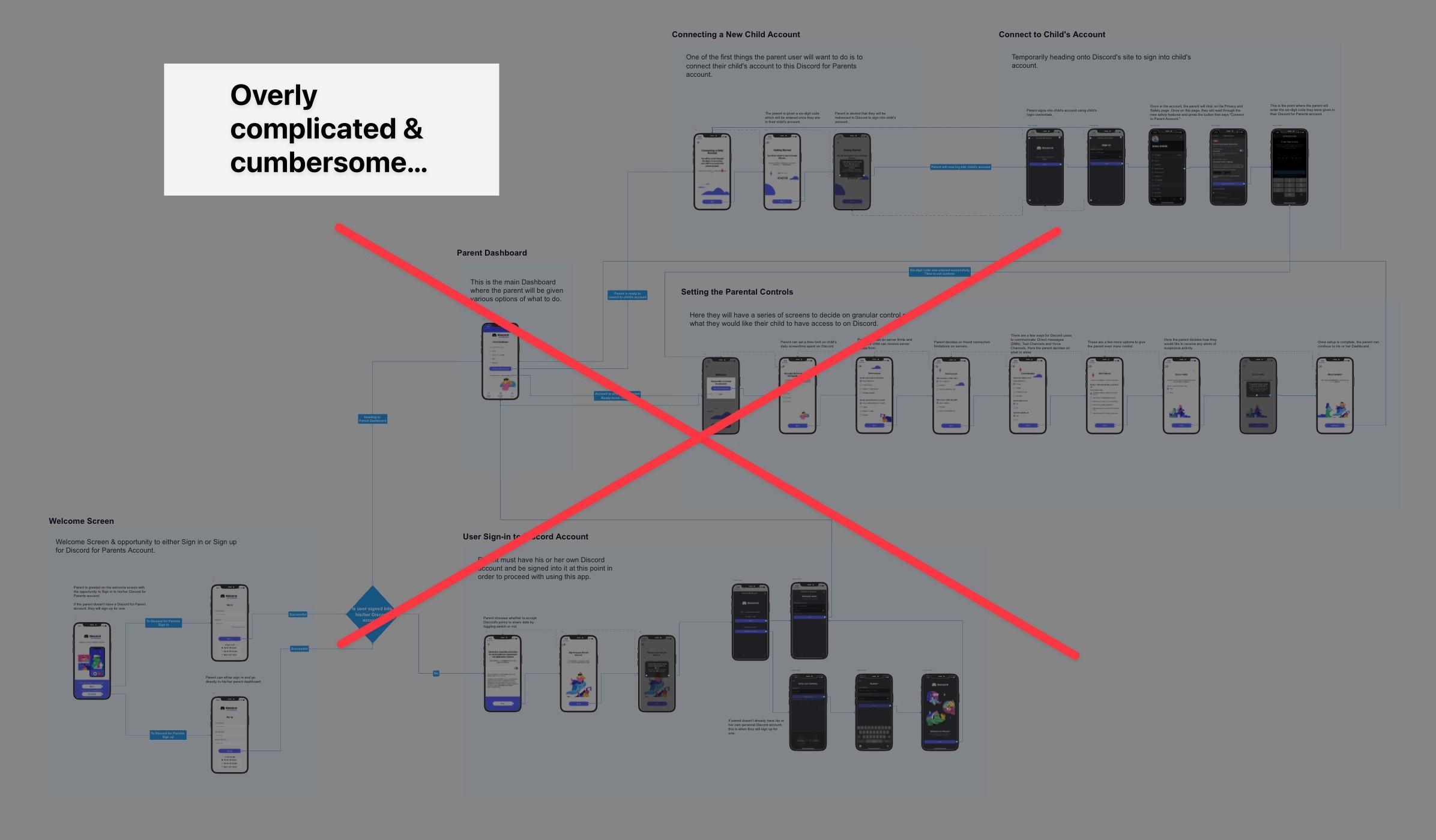 How could I streamline the whole process?

In order to streamline the process for my parent users, I decided to think in components, or reusable building blocks as I designed and built in Framer. This made it an easy process to move from design into prototyping and testing my new design.

Back to the Basics

I revisited my user flows by mapping out a new user journey in Overflow. This really helped me find a much-simplified user flow. 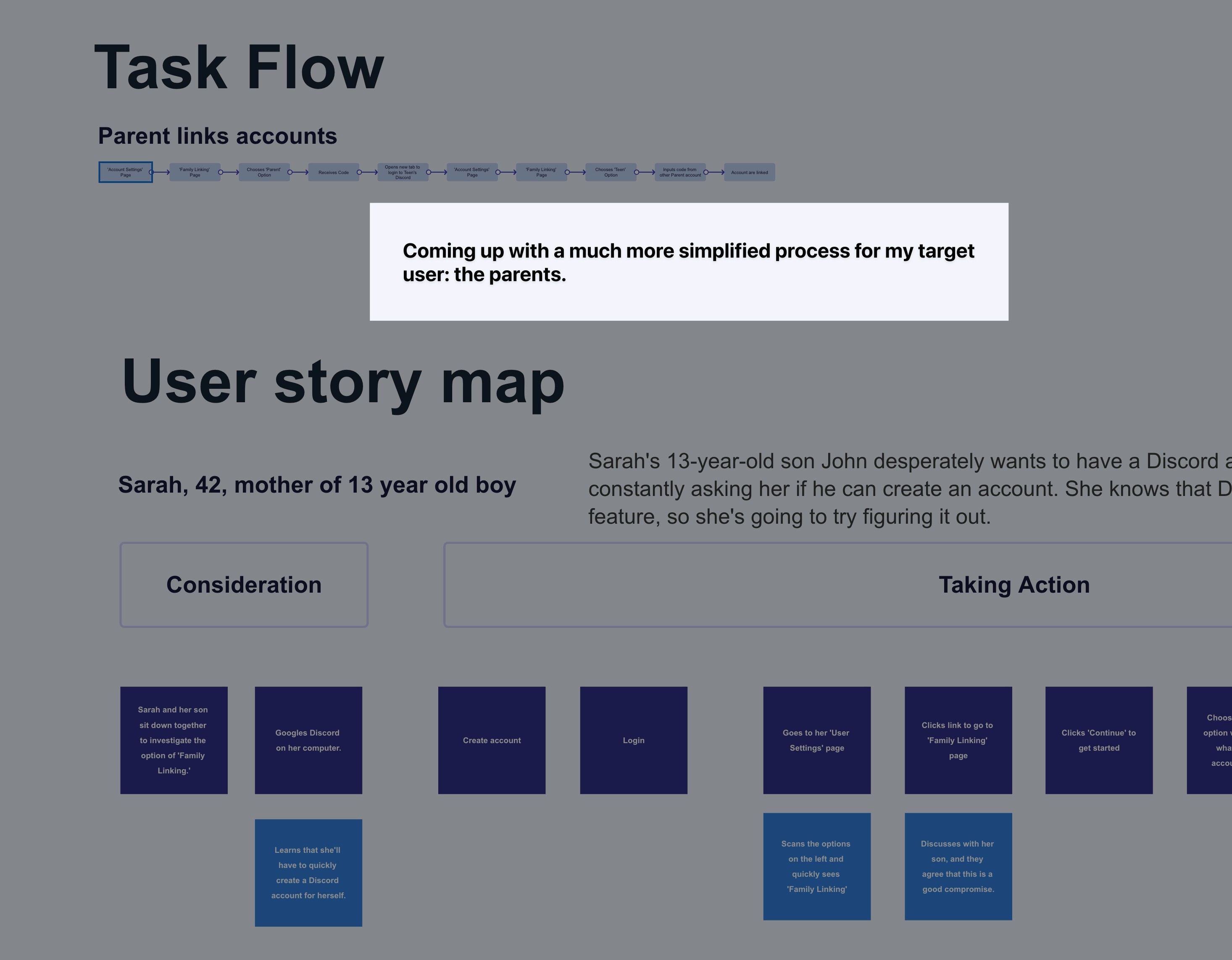 To see my full user journey and user flow, click below.

Designing with a Component Mindset

Step 3: Confirming and Heading over to Settings

Step 4: A Granular Level of Control 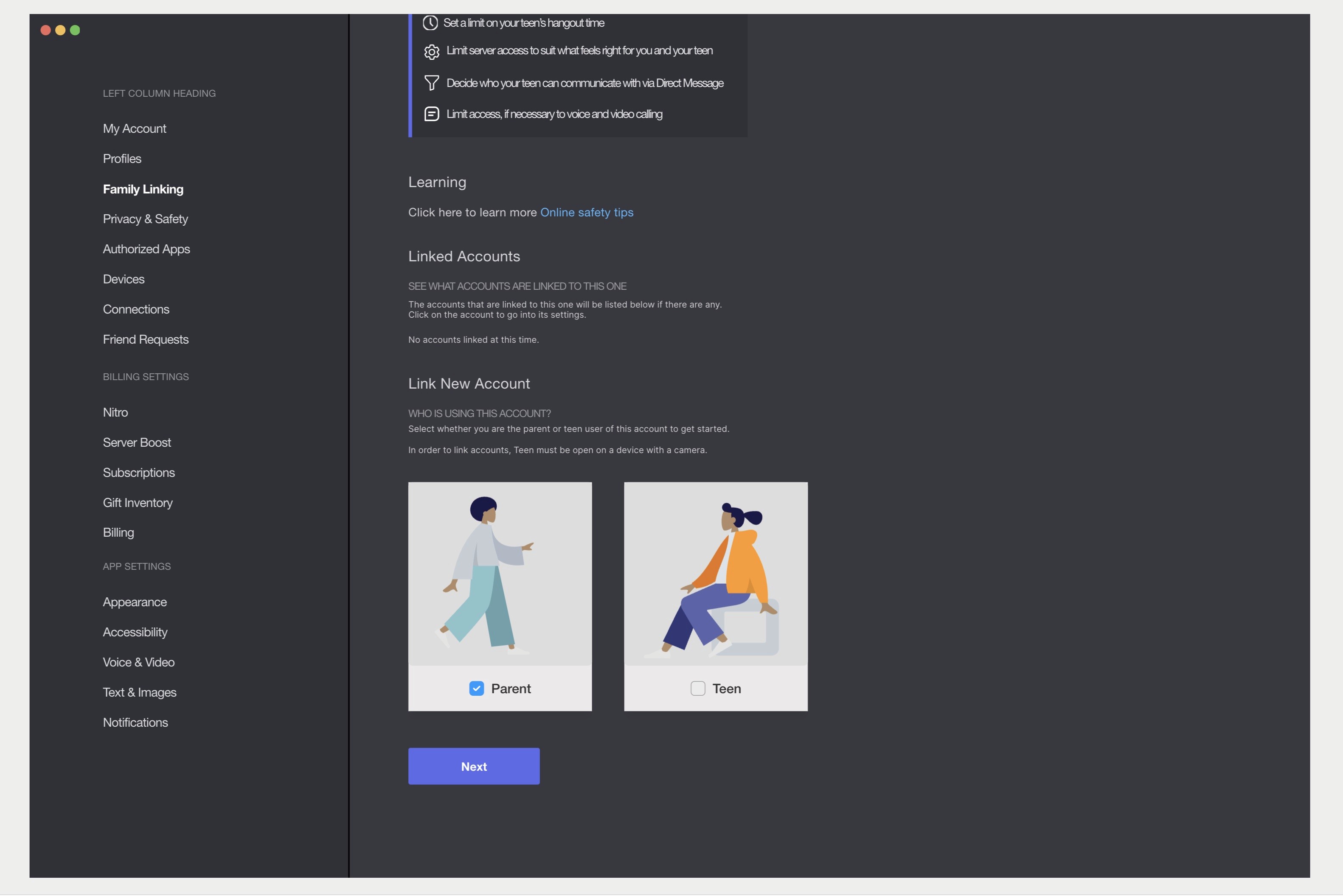 Although this is a hypothetical project, I have gained a huge sense of appreciation for what goes into the thinking behind safety features in apps.

I have thought a great deal about not only the mechanics of how the features should work, but I have also deeply pondered the ethics of limiting control in an app.

While I wouldn't say that there is a perfect solution to protecting kids on the internet, as a parent, I have been encouraged throughout the research I have done to see that many tech companies are paying attention to what parents are saying. The internet — and technology in general — is a wonderful thing and is here to stay. As parents, it is our responsibility to teach young people how to navigate this world.